skip to main | skip to sidebar

It's almost February, which means 2011 is well underway. To ring in the new year, we've started a new BB blog over at www.bettyburke.com

We are playing a string of shows, including an EP release on Friday, February 25th at the Holy Oak (1241 Bloor Street West) with Evening Hymns, here in Toronto. The full list of shows is as follows:

Thursday January 27th - Guelph, E Bar - "Ghost Highway Review" with The Phonemes, and local guests Your Neck of The Woods

The EP, "Dirty Mouth of The St Lawrence River" is a five song story about the Seaway, it includes an 18 page comic, and covers silk-screened by Cheryl Cheung: the cover image is a vellum overlay of the river before and after "Inundation Day" - July 1st, 1958. We are excited to be releasing the project with "fellow travellers" Blocks Recording Club.

Thanks for visiting this site. Please visit us at bettyburke.com for more stories, notes, and news items.

See you soon,
BB
Posted by Betty Burke at 11:39 PM No comments: Links to this post

Newspapers and blogs are replete with year end lists this week, but as last page turns on the calendar, politics and pop culture are low on the list of things I remember about 2010. Today my thoughts belong to the people we've lost- artists, political activists, friends, and community members who will be missed. Closest to my own heart are Will Munro, and my family member, Margaret Cross, both of whom left this world too soon, and gave of themselves endlessly when they were living.

Yesterday, as I returned to Toronto after holiday visits with family, I learned that David Noble had died suddenly. I didn't believe it at first; the man was overflowing with vital force. David was my teacher at York, and I spent a year participating in his weekly left winger group therapy sessions, also known as the "Technology and Western Culture" seminar, in a tiny basement room around the corner from the rodent experimentation labs. He often asked, "And how does that make you feel?" when discussing the course readings- a question rarely asked of students by their professors.

What I admire most about David Noble is that despite the nearly impossible battles he chose to fight, he never grew tired and lost his will to fight for social justice. There were many who were skeptical of his accusations, his claims, and his chosen struggles, but no matter what your position on Israel, capitalism, and the relationship between technology and labor, David's perseverance, dedication, and sense of humor call for admiration. He seemed angry at the microphone, and he was, but as soon as he'd sit down after a good shouting session, he would be smiling again and enjoying the company of his students, his friends, his peers. Rest in peace, David Noble.

xo
MM
Posted by Betty Burke at 4:26 PM No comments: Links to this post 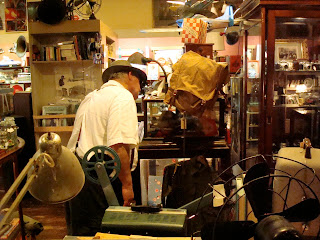 Marietta, Georgia is a small town twenty minutes from Atlanta. If you've been to Atlanta you're probably familiar with the Little Five Points neighbourhood, with Criminal Records and a great used record shop around the corner from each other. You wouldn't suspect to find yet another amazing record store twenty minutes from the city, in the back of an antique shop, but that's exactly what happened to me on a recent southern sojourn. 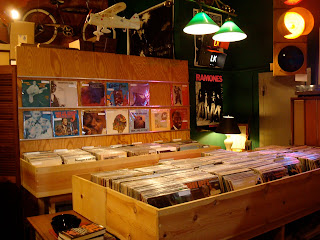 Sweet Melissa's antique shop is full of model planes, post cards, furniture, and military memorabilia. Finding a few gems in a dollar bin at such a shop would not be such a shocker, but Melissa carries a wide selection of vinyl used and new and the quality of her collection is on par with standard bearers such as Toronto's Rotate This. Considering the size of Marietta (population 58, 748), and the difficult times many record shops are having, finding Sweet Melissa's record shop was a little surreal.

The highlight of the visit was finding a copy of The Kinks "Arthur" with the Queen Victoria paper doll inside, I also picked up Leonard Cohen's "Songs From a Room," The Cramps "Songs The Lord Might Have Taught Us," and from the dollar bin, Hank Williams' "I Saw The Light," Glen Campbell's "Wichita Lineman," and Sweet Melissa threw in Prince's "Dirty Mind" for free. I almost bought a Sonny Boy Williamson record, but I wasn't sure which Sonny Boy it was- the guitarist or the harmonica player- so I didn't bite. There were lots of blues records, new indie/pop records, and collectors items aplenty.

When I left Sweet Melissa Records to join my parents for lunch across the street, a man at the next table spotted the square bag under my arm and asked what records I'd found. He was in town for a business lunch with a colleague, so he didn't know about Sweet Melissa's shop. When he saw the Cramps record, he asked me, "Do you know who produced this? Alex Chilton. Have you ever heard of Big Star?" As it turns out, the friendly fellow- A.J.- hosts a community radio show on WWOZ in New Orleans. You never know who you're going to meet in America.

You can visit Sweet Melissa Records online at: www.sweetmelissarecords.com

Happy Listening,
MM
Posted by Betty Burke at 3:13 PM No comments: Links to this post

Fifty River Concerts Q and A with Betty Burke

Our dear friend and collaborator Holly Andruchuk is doing great things with Fifty River Concerts. If you are looking for a great place to play in the Toronto area, get in touch with Holly and her pal Tim McKay to set up a show at the Imperial Pub as part of their Thursday Night Music series.

On the eve of our gig with Fifty River, Holly and Tim sent me a set of well-researched, thought provoking questions. If you want to know a little bit more about what's behind the songs we perform, have a look at the Fifty River site. On the same page you'll find a Phonemes Q and A, and a Kathleen Phillips piece.

In other news, the Keith Richards biography is finally here. I am getting my copy tomorrow. BB keyboardist and vocalist Sheila Sampath sent me a link to Liz Phair's review of the book, here, at the New York Times site.

It's just about that time now- time to pull on some slippers, and crack open a Kurt Wallander mystery. Before I go, let me leave you with a little music to sweeten your night, wherever you are. From Keith's friend Gram Parsons, and Emmylou Harris, here is "Love Hurts."


Good night and sleep tight.
MM
Posted by Betty Burke at 10:46 PM No comments: Links to this post

Please join Betty Burke, The Phonemes, and Kathleen Phillips for a very special show at the Imperial Pub this Thursday. Presented by our sister Holly Andruchuk's 50 River Concerts and the Imperial, this will be a memorable evening.

Kathleen will do comedy, and BB and The Phonemes will sing and tap things (guitars, tables, keys.) You can see the Phonemes in the above video, performing the song "Sacred Heart." The video was done by Mitch Fillion as part of his Southern Souls project.

In addition to a surprise guest, BB's special guest performers include Sarianna Mileski and Stephanie Markowitz. Sarianna will be singing a new number called "The Prince," which is dedicated to all the mysteriously single Torontonians. You know what I mean- people who can't get a date in this town despite all kinds of amazingness.

Kathleen will kick things off at 9pm, followed by The Phonemes- our dear friends Magali, Stephanie Markowitz, and John Tielli- and then BB. It's an early one, friends, so don't delay in making your way over.

Blocks is a workers' co-operative based here in Toronto. Visit this link to read more about this important local institution.

For this show, Sheila, Jo and I will be joined again by the ghost of a drum machine. This might be a permanent haunting.

We hope you will join us for this special evening.

xo
BB
Posted by Betty Burke at 10:54 AM No comments: Links to this post

Of All the Things We've Made

A little while ago my friend Chris Korte sent me a link to the great History of Electropop series that some dear soul added to youtube. I made the mistake of watching the OMD profile before 'going to sleep' - but after seeing the clip, sleep was not possible!!

For those of you who aren't already superfans, OMD, or Orchestral Manoeuvres in the Dark (a name they later regretted choosing, for its pretentious flare) released a series of innovative, dark, and unprecedented works between 1979 and 1983. Inspired by Kraftwerk, they were contemporaries of Joy Division, sharing with them a dark, bass guitar driven sound and a love of The Velvet Underground that placed OMD out of step with other UK synth bands of the era. Their period of greatest inspiration and experimentation culminated in the album 'Dazzle Ships,' recorded before the cookie cutter smushed down on the raw dough of synthpop. While some songs follow pop standards of verse and chorus, many of the tracks are tape collages of radio announcers voices and ship horns. It's the White Album of synthpop- with better cover art.

When I was living the musical life of the Littlest Hobo, touring with The Hidden Cameras, I fell asleep to Dazzle Ships every night. It's always taken me a long time to cool my thoughts before sleeping, but the combination of a nightliner bunk, a "sleep toque" pulled over my eyes, and "Romance of the Telescope" in my ears was even better than a bedtime Gravol. To the tune of the ship horns that open side two, I closed my eyes and imagined what the lights of the Wirral Peninsula might look like to the members of OMD. Soon the twinkling industrial scene darkened in the calm black shadow of sleep.

The procession of successive artists feeding on and reinterpreting a work of art is a testament to its greatness. A few years ago in Toronto, Owen Pallett covered side A of Dazzle Ships, imitating all the synths and samples with wood and string. It was the best possible tribute the the genius of Dazzle Ships, honoring the album and at the same time creating something higher than a cover- like a great director mounting a stylized version of Beckett's Endgame . While it's not the highest quality video, the youtube clip taken from a different staging of the piece will give you a taste of the experience.

By taking the sounds of ship horns and time signals out of context and building them up into a thing of beauty, OMD have punctured one of the illusions of the present. A time signal could be a melody, an accidental echo could be a call to a person in a far off land. The order of things is fragile and temporary, and the everyday could easily be quite different.
Posted by Betty Burke at 1:18 AM No comments: Links to this post

We'll be playing more shows soon. Send us an invite if you'd like us to play in your neighbourhood! 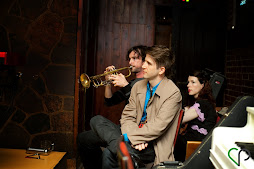 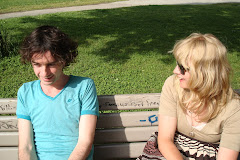 Shaun and Holly in Trinity Bellwoods

What is this band, Betty Burke? We are Maggie MacDonald and a crew of talented collaborators: Jo Snyder, Sheila Sampath, and sometimes special friends like Shaun Brodie and Holly Andruchuk join us too. Picture the spectacles of Elvis Costello, the bacon-banana-PB and honey fried sandwhich of Elvis Presley, and the rectangular guitar of Bo Diddley. This will tell you nothing about our band's sound, but will delight the senses nonetheless.

A Sunday night jam at Shaun and Mez's place

Betty Burke
Betty Burke is my musical pseudonym. This is a blog about things I like, as well as events and projects I am working on with my band.